PINT OF ORIGIN IS BACK! AND, IN 2018, THE GOOD BEER WEEK STREAM THAT SHOWCASES THE BEST BEERS FROM AUSTRALIA AND THE WORLD BY TAKING OVER THE TAPS AT MANY OF MELBOURNE’S BEST BEER VENUES IS SPROUTING NEW TENTACLES.

We’ve shuffled the pack, added new venues and have even created a mini-PoO circuit south of the Yarra as craft beer finally starts to take hold there. In recognition of the sheer volume of great beer available, Melbourne / Victoria and Sydney / New South Wales are split across two pubs each, while Europe’s brewers get four.

Look out for awesome PoO-themed events at individual venues too. Once again, there will be special deals for members of The Crafty Cabal beer lovers bonus scheme as well as Crafty Pint hosted, pop-up brewer shouts. Follow #PoO18 on social media to keep in touch with all the latest.

The Rainbow hosts our northern cousins, with taps dedicated to some of the finest brews from Sydney. Regular tap changes, food matching specials, live music and more. It'll be a cracker!

Sample some of the UK's best beers as Freddies designates one craft brewery to each tap for the duration of GBW, spreading the breadth of England, Scotland and Wales! 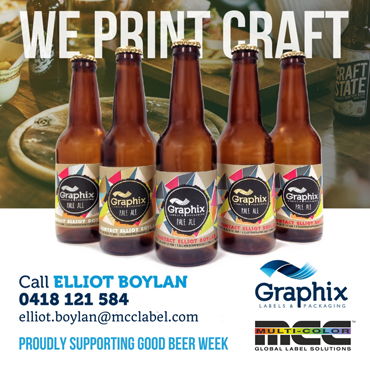 After bringing Irish craft beer to the masses over the last few festivals, the Province takes it to the next level, featuring beers from two of Ireland's leading craft breweries; O'Hara's & 8 Degrees.

After a beer tasting expedition through Canada, Mr West have curated a list of rare and wonderful craft brews to bring over specifically for Pint of Origin, including a collaboration with Collective Arts.

Can we tap 120 American beers that have never been tapped in Australia before? Probably not, but we're going to try! Come in and pair it with pop-up Texas style barbecue from Bluebonnet served all week!

The Lincoln is bringing Tasmania's best craft brewers to Carlton for Pint of Origin. Try some uniquely Tassie (and tasty) beers brewed using some of the finest ingredients on earth.

New Zealand is a place with a pretty good rugby team, a few sheep and a weird obsession with hobbits. It also has one of the most exciting and innovative brewing scenes in the world!

Beermash is the home of Scandinavia all week, featuring beers from Mikkeller, Omnipollo, Nøgne Ø, To Øl, Brewski, Lervig and much more across all 20 taps!

The home of Melbourne beer for GBW18! Expect 'meet the brewer' events, collaboration beers, a pro brewing workshop, a Melbourne vs The World showdown and one of the greatest Melbourne tap takeover parties ever!

Come try the best of South Australia, as the Palace's 18 taps rotate through the finest SA has to offer, including Pirate Life, the Wheatsheaf, Little Bang, Mismatch and more!

From Green Beacon to Balter, Queensland craft breweries have come into their own. We celebrate Queensland beer all week with a bevy of beautiful beers from the Sunshine State.

From one of the fastest growing craft beer scenes in the world, Captain Melville bring you the world of Asian craft beer.